Sasaram became the centre of the Suri Dynasty from 1535 to 1540. From Afghanistan, Ibrahim Ali Khan Suri and Hasan Khan Suri came to India. The well courageous and brave Pathans were granted jaigirdari or Zamindari in Punjab at first. However, due to some differences they came to Bihar. At first they were at Joanpur but later moved to Sasaram. Hasan Khan Suri basically kept the foundation rock for the Suri Dynasty and lived with honour. However, after his death he was cremeated in Sasaram. A tomb was built in his grave by his son Sher Shah Suri. It is known as the Tomb of Hasan Khan Suri is situated in Sasaram near the Tomb of Sher Shah Suri. 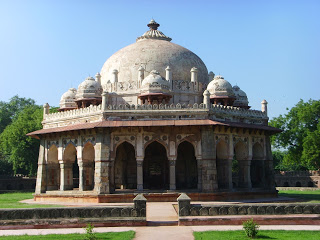 Places to visit in SasaramThe fortune of Hasan Shah Suri turned good as he moved to Bihar. The history of the Afghan Pathan started from that point. Hasan Shah Suri was the son of Ibrahim Khan Suri. He was under regime of Baharol Shah Lodi. Hasan Shah Suri however became faithful to Sikandar Lodi. Sasaram Parganah was given to the great leader and brave warrior from where he used to give directions. However things turned ugly when the Mughals invaded India and Ibrahim Lodi was defeated in the First battle of Panipat in 1526. Babar came to the power. He was later killed in the battle of Kalinjar. The tomb was most probably built during the reign of his son Sher Shah Suri and completed somewhere around 1550 under Islam Shah, his grandson. The Tomb of Hasan Shah Suri was built closer to the tomb of Sher Shah.

Like other structures built during the time of Suri Dynasty, the Tomb of Hasan Shah Suri also has the typical Indo-Islamic influence. The Afghan reflection on the structure can be easily felt and seen. The historian says that this one of the finest structures made during that time. It is believed that the establishment was started at around 1535. It was built by Aliwal Khan who later designed and has built the Tomb of Sher Shah Suri. The two tombs of Father Hasan Khan Suri and son Sher Shah Suri are distanced for around 500 meters. The tomb is built in a square enclosure. The tomb has a grand main gate which is also the only way to enter into the tomb. The dexterity at the gate depicts the Afghan style. However, the tomb gets more beautified with the blend of Indian style along with the Islamic style of architecture. The old monument is one of the many tombs in the Sasaram city.

Hasan Khan Suri was the first leader who led the foundation of the Suri Dynasty. It was under his leadership, the Jaigardir of Sasaram dreamt of ruling the entire country from Delhi. Hasan Khan Suri was a great administrator and it is believed that he gave all his exposure and learnings to his son. The administrative policies of Sher Shah Suri is however very famous in the world. The tomb consists of the grave of the great Afghan leader also the Jagirdar of Sasaram. His tomb is very popular among the local people and the tourists. Apart from the historical importance, The Tomb of Hasan Khan Suri also acts as the source of inspiration for the local people. There is hardly any tourist who comes to visit the ancient city Sasaram who does not visit the Tomb of Hasan Khan Suri. The monument is under the maintanence of Archaeological Survey of India. The ASI takes care of the ancient of the monument and repaired it time to time so that present day people can enjoy the architectural excellence of yesterday. There is a link between the Tomb of Sher Shah Suri and Tomb of Hasan Khan Suri, the link or the path can be accessed to go from one tomb to another. However, the path is not accessible to the public.

Keeping many visitors even from outside the country, the Tomb of Hasan Khan Suri has been renovated in recent times. The area outside the tomb is quite clean and all other facilities like popular restaurants and hotels are available.


How to Reach Tomb of Hasan Khan Suri ?

The Tomb of Hasan Khan Suri is situated at the Sasaram City. The ancient city is located at the Rohtas District of Bihar State in India. The city is at the junction of all crucial transportation systems of India. Located at the eastern side of the country Sasaram is accessible by Road, Railway and Air medium.

Road
Sasaram is situated on the busy National Highway 2 or ‘The Grand Truck Road’. The Road connects Kolkata to National Capital New Delhi. However, the road further goes to Amritsar and then enters Pakistan and goes to Peshawar. The Sasaram Bus Stand connects the city to the State Capital Patna and nearby metro Kolkata. Apart from it any other mode of private communication can be opted to reach the historic place.

Railway
Sasaram city comes in the busiest Railway Network of Indian Railway. The New Delhi to Howrah Railway Network which also connects whole Eastern and North Eastern India to National Capital of India and other Northern States also has Sasaram as a Railway Station. Many Express trains have stoppage at the Sasaram Railway Station and from there the Tomb of Hasan Khan Suri can be easily reached.

Air
The city of Sasaram can be reached from nearby three airports. The city is accessible to the International Airports of Kolkata and Gaya and also to the domestic airport of Patna. The city is about some 6-10 hours journey on average from the city. The ancient city does not have its own Airport but the other transportation system connects it to the nearest.

The entrance to the tomb of the great leader is free of cost. No Charge is taken to witness the history and salute one of the greatest leaders of history.