A city in the Eastern India, Sasaram is representative of its own glory and history. The ancient city is believed to be existed from pre-historic times. However, the fame of the city came in the reign of Sher Shah Suri who was the son of the soil. Representing the religious harmony through its culture, and history, Sasaram has plenty of famous mosques besides having ancient temples. The Islamic style of architecture and dexterity is famous for Sasaram. Mosques inherit the dexterity of the Mughal and Suri Dynasty mainly has the Indo-Afghan Style. However, the mosques built in the recent times have similarities with Indian architecture. The Islamic history in Sasaram is known from the time of Hasan Khan Suri, father of Sher Shah. However, at later point of time Mughal Emperor Jahangir also showed interest in the Sasaram and also made mosques in the city. Few of the famous mosques in Sasaram are the following. 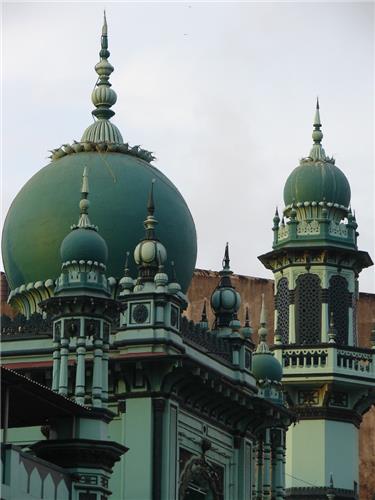 Murumatu Masjid is one of the old mosques present in the Sasaram city. The mosque is known as one of the major Islamic cultural centres of Sasaram. Eid is celebrated with full enthusiasm in this mosque. It is involved in many other social activities like Madrasa Education and others. Five times of Azan are offered here. The crowd during the Ramzan or Ramadan month, the holy month of Islamic calendar is tremendous. The mosque is standing in the area as a unit for the Muslim people of Sasaram.

Masjid-E-Rahimiya is another famous mosque in Sasaram. Even though the mosque is not very large in size but that does not reduce the significance of the mosque. Many people from the nearby are come here to offer Namaz. All the five times of Namaz are offered here. An Islamic Priest always stays at the mosque and takes care of all religious activities. All the Islamic cultural events and rituals are followed here. This mosque also acts as the cultural centre for the nearby Muslim residents. Eid is celebrated here and the celebration is considered one of the best in the nearby areas.

Badi masjid is probably the largest of all the mosques present in the Sasaram city. The name literally means Large mosque. However, exact area and dimension of the mosque is subject to debate. Standing as the Islamic institution and worship place, Badi Masjid is one of the most famous mosques in the Sasaram and adjoin area. Known for accommodating many people during the Namaz, Badi Masjid hosts many people for Namaz. All the five times of Namaz are offered at the mosque. The crowd during the Ramadan or Ramzan month is incredibly high and large. The Eid Celebration of Badi Masjid is grand and unique.

Both Badi and Choti Masjid are located in close proximities. However, the importance and influence of the Choti Masjid does not resemble it name. It is one of the most prime mosques in Sasaram. All the Islamic rituals are followed here with all the events and festivals such as Eid-Ul-Nabi and Eid-Ul- Fitr. All the five times of Namaz are offered here.

Chirag-E-Olum is a very old mosque in Sasaram and adjoining areas. Known for its old and heritage dexterity, Chirag-E-Olum serves as one of the most important mosques in whole of Sasaram area. It is one of the mosques in Sasaram which shows the Indo-Afghan architecture and dexterity. The mosque is also the cultural centre for the Muslim people. The celebrations of the various Islamic festivals on this mosque are huge and attend worthy. People from surrounding areas come to visit the mosque in special days like Eid. All the five times of Namaz are offered at the Chirag-E-Olum mosque in Sasaram.

Netamat-Pur Masjid is a heritage mosque built with the Indo-Afghan dexterity and architecture. The old mosque has lost some of its structure due to age but mosque authorities are trying to rebuilt the heritage mosque at least some portion to give it a fresh look. Many of the people from nearby areas come to the mosque to worship and offer Namaz. There has been immense popularity of this mosque since long time and the mosque continues to hold the reputation. All the five times of Namaz are offered here and alongside all the Islamic events and festivals are celebrated here.

Eidgah Masjid is famous for the celebration of Eid in the area. According to the local people the best Eid celebration of the Sasaram and adjoining areas is celebrated here. Built in Indo-Afghan style of architecture, the Eidgah Masjid is one of the prime mosques of Sasaram. The Eid celebration is quite different here and many people attend the events. ‘Semaya’ or sweet dish of the mosque during the Eid is very famous. The crowd during the Ramadan or Ramzan is also very high in the mosque. All the five times of Namaz are offered here in the mosque.

Jama Masjid of Sasaram is situated in Daltenganj area of Sasaram. Built in many years ago, the mosque is the Islamic cultural centre of the nearby area. The mosque is also considered as one of the major and old mosques in the area. However, the area of the Jama Masjid is not so big, but it continues be the worship place of the nearby Muslim people. All the five times of Namaz are offered here. The mosque becomes a crowded place during the Ramadan or Ramzan and Eid time.

Apart from the mosques Sasaram also consists of many historical tombs. The Tomb of Sher Shah Suri, Tomb of Hasan Khan Suri, Tomb of Chanden Saheed and Tomb of Malik Wishal Khan and many others. It is said that Sasaram is the home for many Muslim tombs that are either lesser known are forgotten. However, in some of the tombs, Namaz is being offered and Islamic activities are followed. However, few of the places remained a tomb and worshiping does not occur there. But many more mosques and tombs can be found out ancient, small and less known once a visit is paid to the historic city of Sasaram.