The beauty and the charm of Sasaram City is immense and intrinsic. There would hardly be anyone who can escape the valuable and equally enthralling experience of the city. Mostly known as for the ancient heritage and contemporary Indian History, the ancient city has scores of ancient architecture spread all across the city. Chandan Saheed hill is one of the marvellous destinations that have glorified the history and existence of Sasaram. Chandan Saheed is the name of the hill situated on the outskirts of the Sasaram City. The hill top of Chandan Saheed is famous for holding so many things. Bestowed with the natural beauty, Chandan Saheed Hill is the home of temple, mosque and ancient Buddhist inscription. The hill is often referred as the center of harmony and peace by locals have unique specialty. Majorly, there are three things that are famous in the Chandan Hills. But the specialty of the three religious establishments is all of them belong to different religion and yet existing together from ancient time.

This is the biggest and most popular religious place of Chandan Saheed and also of Sasaram. The temple is considered as one of “Maha Shakti Peeth” in Hinduism and is famous for the divine environment. The three story temple is believed to be existing there from ancient time. The King Sasastrabahu of ancient times was devotee of Maa Tara and used to come in the temple. Another legend of Hinduism Parshuram was supposed to be at the cave of Maa Tara Chandi Temple. Apart from it, it is believed that Budhha also came to the temple of Maa Tara Chandi and Maa met him in disguise as a girl. The mythological connections and immense popularity has made this temple one of the most desired tourist destinations of Sasaram. The “netra” or the “Eye” of Maa Sati was believed to have fallen here during her self-immolation. The Temple also organizes the famous “Shravani Mela” in the city. The festival is getting celebrated in the city from thousands of years and is one of the major festivals of Sasaram. The crowd in the temple reaches at the peak during the Navaratri and the Shravani Mela. 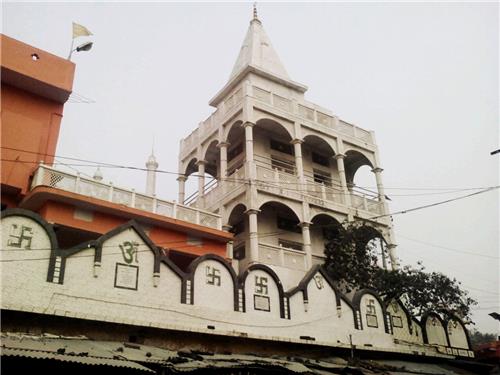 The hill is known for being the place of ancient heritage and also the religious centre. The ancient history of the hill was even present at the time of Maruyan Empire of India. There is a cave in Chanden Saheed which is famous for having ancient Buddhist inscription. The Chandan Saheed cave is famous for having the inscription. However, at the later stage of time it was discovered that the inscription was of Maryuan Emperor Ashoka. The inscription was written in ancient Pali language and specialists have discovered the association of Ashoka. The presence of the inscription established the fact of an ancient civilization of Sasaram even during the reign of Ashoka. The influence of Buddhist Culture can still be felt at the Chandan Saheed Hills.

The Tomb of Chandan Saheed

The Tomb of Chandan Saheed is another very popular place in the Sasaram City. It also consists of a mosque which is situated at the foot of the hill. The mosque was established during the reign of Mughal Emperor Jahangir. The architecture and the dexterity of the mosque and the tomb reflect the Mughal style and is one of the very few Mughal style structure in the city. The Indo-Islamic establishment has been the attraction of many tourists from many years and is considered as one of the most beautifully crafted architecture. The city is home to many tombs and mosques but the Tomb of Chandan Saheed is special and unique. The Mosque is situated at very close proximity to the Maa Tara Chandi Temple and is famous for establishing communal harmony in the area along with the temple. The historic place depicts the ancient architectural excellence and man made architecture of the Sixteenth and Seventeenth century.

How to Reach Chandan Saheed Hills ?

Chandan Saheed Hills located at the outskirts of the Sasaram City. The private vehicles are easily available from the main city. The transportation from the Sasaram City to Chandan Saheed would not be a problem for the visitors. The surging popularity of the Sasaram City as a tourist spot has ensured mode of transportation to each and every corner of the city especially to the tourist centers. One can easily reach Sasaram over the Grand Trunk Road or National Highway 2. Many bus services are available from the adjoining cities to Sasaram. Sasaram Railway Station comes in the New Delhi to Howrah route of Indian Railway Network and many trains take a stop at the station. For reaching Sasaram by air, one has to fly down to either of Kolkata, Patna, Gaya and Varanasi city and then take other mediums to reach the ancient city.